The Grayscale Bitcoin Trust (GBTC) has been having its adversest month in its seven-year history. GBTC has dropped to nearly a 12% discount, its highest ever. However, according to one analyst, this could signal Bitcoin’s spike to $100,000 if history repeats itself.

GBTC has been the /grayscale-sweeped-1-27-billion-in-btc-off-the-market-in-one-week/”>outright leader in institutional Bitcoin acquisition. It allows these investors to purchase shares in the trust for exposure to Bitcoin, without having to hold their BTC. It currently has $32.4 billion in assets under management, equivalent to 649,130 BTC or 3.09% of all the BTC in supply.

GBTC shares have consistently traded above their net asset price (NAV) since they launched in 2013. As per data from Chicago-based YCharts, they trade 37.78% above their market value on average. In May 2017, they set the record by trading at 132% above their NAV.

However, in the past week, the fortunes have changed for Grayscale. On February 25, it traded at a 3.77% discount for the first time in over five years. Since then, it has been trading at a discount, with March 4 setting the new record at an 11.59% discount.

While many fear that this could be the beginning of the end for Bitcoin’s bull market, one analyst predicts it’s just getting started. Mike McGlone, a senior commodity strategist at Bloomberg Intelligence believes that Bitcoin could double in price as a result of the dip in the GBTC shares prices.

/wp-content/uploads/2021/03/Grayscale-Bitcoin-Trust-at-its-Highest-Discount-Ever-Could-Signal-Price-Rise-to-100K-1024×561.png” alt=”Grayscale Bitcoin Trust at its Highest Discount Ever Could Signal Price Rise to $100K”>BTCUSD Chart Via TradingView

Grayscale #Bitcoin Trust Discount May Signal March to $100,000 – Bitcoin’s end of February price disparities on U.S. regulated exchanges portend a firming price foundation, if history is a guide, and are evidence of just how nascent the crypto is. pic.twitter.com/qj6hfTvH8K

The analyst pointed to a chart that indicates the last time institutional investors bought GBTC shares at a discount, it sparked BTC’s spike to $20,000. This was in early 2017 when Bitcoin was trading at $3,600. The GBTC discount is, according to the analyst, one of the factors that significantly indicated Bitcoin’s subsequent spike.

“Sharp reductions in the GBTC premium have often marked bottoms in Bitcoin,” he wrote. 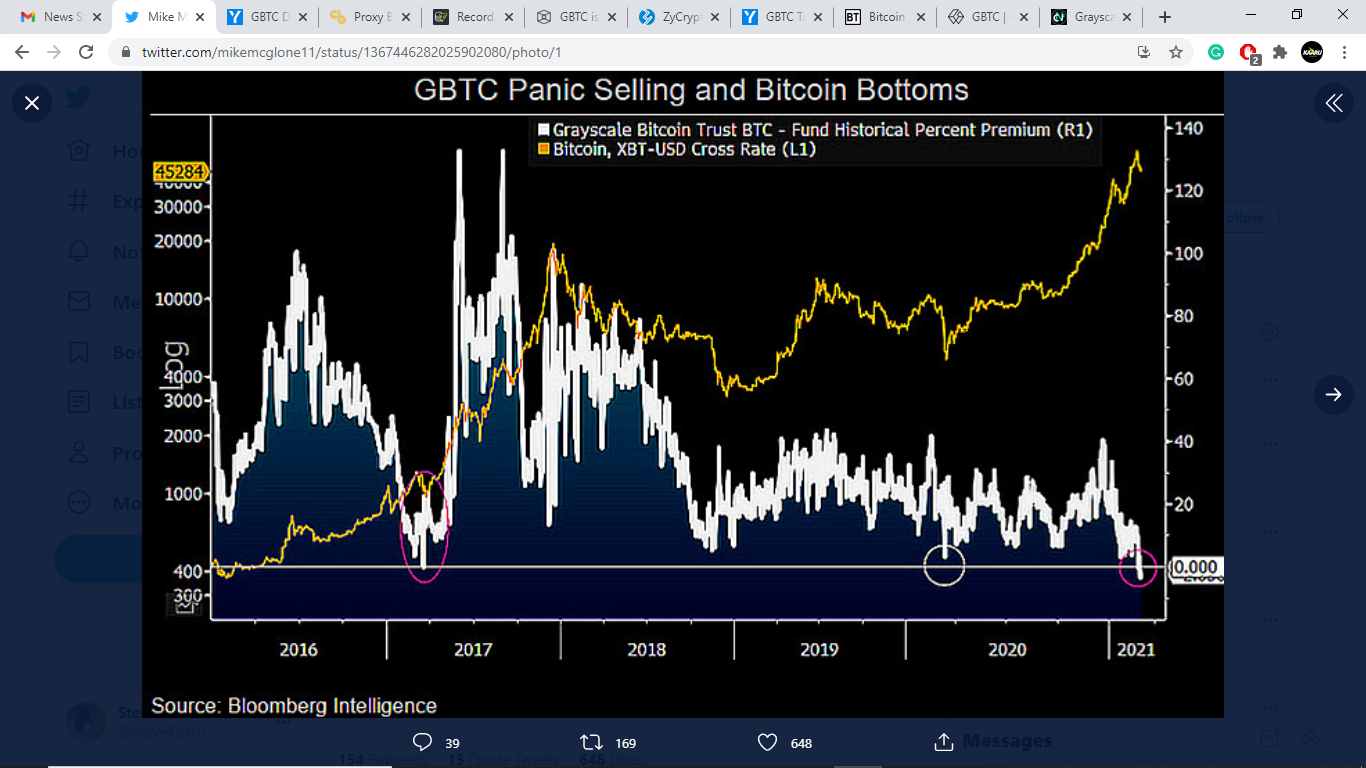 The analyst added, “Bitcoin’s end of February price disparities on U.S. regulated exchanges portend a firming price foundation, if history is a guide, and are evidence of just how nascent the crypto is.”

McGlone has a history of making the right calls on asset prices. He came into the radar for crypto enthusiasts when he predicted, accurately so, that Bitcoin would hit $50,000 in the first few months of 2021.

His prediction is backed by Bloomberg’s research which stated that Bitcoin is firming its position as the digital store of value. In its March edition of the Bloomberg Crypto Outlook, the media and research giant stated:

“Bitcoin in 2021 is transitioning from a speculative risk asset to a global digital store-of-value, in a world going that way, in our view Bitcoin is a complement to the greenback, but in the process of replacing the old-guard reserve asset — gold. We see prudent diversification sustaining a rising tide in this price discovery stage for nascent Bitcoin.”

Bloomberg predicted that Bitcoin will retrace after its bull run in the past few weeks above $40,000. After finding support at this level, it will then spike to $100,000 as it transitions from a merely speculative asset into a reliable store of value.

What Do You Meme Token: The New Buzz Asset For The Community (Zycrypto)