What’s the Healthiest Chart in Crypto? The Developer Count

As some crypto prices show signs of flagging heading into 2022, at least one chart remains healthy: the blockchain developer count.

According to a report released today by investment firm Electric Capital, the crypto developer ecosystem has notched all-time highs in multiple metrics including monthly active developers and highest number of new developers in a calendar year.

According to Electric Partner Avichal Garg, it’s a robust sign of health and growth for the industry as a whole.

“The developer ecosystem, we’ve always thought it was the leading indicator,” Garg told CoinDesk in an interview. “The engineers are closest to whether or not there’s real value, and this many people coming in, playing with it, is a good sign. That relatively rational people who make a lot of money – their time is valuable – are spending that time here, that’s a positive long-term indicator.”

Garg noted that the developer count remains robust even in times of bearish market action, such as in late-2017 to mid-2020, but picked up steam during 2021′s crypto-asset bull run.

“Everybody who came in, they’re not all staying – there’s a bunch of developers leaving during the bear market,” he said. “But the number of new developers offsets those leaving, and then it continues to pick up in the bull.”

Chains that stand out

While Ethereum comfortably leads all blockchains with 4,000 monthly active developers, Garg said one highlight of the report was the emergence of non-Ethereum layer 1s.

Solana in particular has “broken out” with almost a 5x multiple to just under 900 monthly active developers, and the developer count is now outpacing Ethereum at the same stage of its growth cycle.

In addition to Solana, Terra is roughly tracking Ethereum’s growth pattern, Avalanche is narrowly ahead and Smart Chain initially surged, but has since flagged. In total, 10 different smart contract platforms now have over 250 monthly active developers. 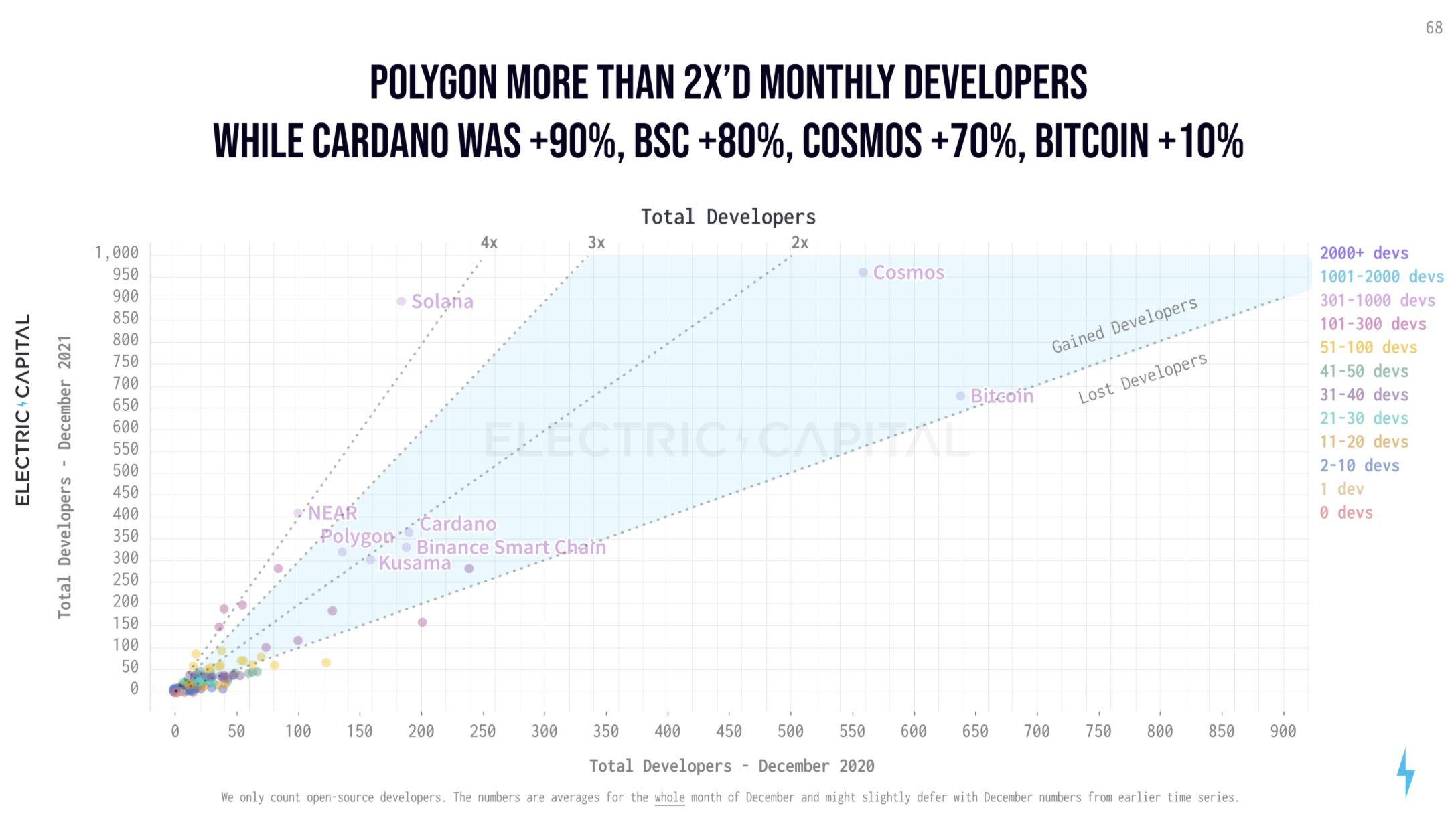 While the growth of alternatives has been impressive, Garg says that the effort from multiple chains to match Ethereum’s growth is actually a testament to how quickly ETH’s developer community formed.

“One of the takeaways for me is that it’s really impressive that Ethereum had this growth trajectory,” he said. “The ecosystem was so much smaller – in terms of the absolute number of developers, it’s so impressive Ethereum could do this.”

Garg added that ultimately the report highlights all the growth that has yet to come.

“To put it into context, we have 18,000 or so monthly active developers. But then you look at something like JavaScript, they have 16 million – almost 1,000x as many. When you’re talking about the sheer scale of how big a programming language can get and how successful they can be, we’re still so early.”

Economies Are Much Too Complicated To Plan And Control

This site uses Akismet to reduce spam. Learn how your comment data is processed.