Why crypto might grow like the early 2000s tech stocks: An introduction to the Gartner Hype Cycle (Cryptoslate)

Developed by research company Gartner to represent the adoption of new media, hype cycles have been used since the 1990s to quantify and predict the performance of groundbreaking new technologies. With the Gartner Hype Cycle perfectly describing the ups and downs the dot-com boom saw in the early 2000s, many have wondered whether applying the methodology to the crypto industry would provide more clarity as to where the market is heading.

Quantifying bold promises from new technologies with the Hype Cycle

Since the early nineties and the beginning of the internet boom, each new technology has carried with itself a huge amount of hype. And while publicity has often been one of the most important factors in technology adoption, it often clouded the public’s vision of what was actually commercially viable and sustainable in the long term.

To help both investors and the public discern the hype from real value, American research and advisory company Gartner came up with its trademarked Hype Cycles—a representation of the maturity and adoption of technologies and applications and their relevance to solving real business problems.

Every Hype Cycle boils down a new technology’s life cycle to five key phases—the innovation trigger, the peak of inflated expectations, the trough of disillusionment, the slope of enlightenment, and the plateau of productivity. If applied correctly to new technology or application, Hype Cycles can help investors get a better understanding of where the technology stands and evaluate the risks involved with investing in a certain period of time.

But, what does an often-disputed metric usually applied to the dot-com bubble in the late nineties have to do with the crypto industry? And how can it be used to quantify the adoption of blockchain, a technology that continuously fails to resemble anything we’ve seen in the market so far?

Since the first Bitcoin block was mined in January 2009, the cryptocurrency industry has been on what can only be described as a wild ride. The massive ups and downs cryptocurrency prices have seen in the past decade did little to convince the general public that it was seeing a rise of a new monetary system and not a get-rich-quick Ponzi scheme. The equally fast growth crypto media has seen in the meantime has convinced many that a single article can be as big of a market mover as a major financial recession.

And while the crypto community has been embroiled in a decade-long discussion with the mainstream about the viability of cryptocurrencies, blockchain technology has been on a low-profile journey almost all emerging technologies have gone through.

The innovation trigger for blockchain technology was the Bitcoin whitepaper, a single event that started a ripple effect of breakthroughs. It led to the creation of other cryptocurrencies and ideas about additional implementation for blockchain. While extremely exciting to the small population involved in the niche technology, the first phase of the cycle often produces no usable products and has no proven commercial viability.

This was the case with Bitcoin, which remained essentially worthless until 2010, when the first BTC trading platforms emerged from the BitcoinTalk Forum. The following couple of years were market by price volatility and low adoption.

The second phase blockchain encountered was the peak of inflated expectations, where early publicity produced a number of success stories accompanied by an almost equally high number of failures. For blockchain, the second phase started in 2014 with Ethereum and reached its peak in 2017 with the market mania surrounding ICOs. The period between 2014 and 2017 saw an unprecedented rise in adoption, with the retail market being responsible for most of the price hikes.

Ethereum made it cheap and easy for essentially anyone to issue a token. Hundreds of millions, and sometimes even billions of dollars were raised overnight, with investments flooding in from around the world into projects backed with little more than a website.

However, the wild west that was the ICO boom met its end in 2017, when blockchain entered the third phase of the Hype Cycle like clockwork.

The trough of disillusionment, Gartner’s third Hype Cycle phase, is described as a period of waning interest as new technology experiments and implementation fail to deliver their ambitious promises. According to Gartner, this is where producers of the technology, or in this case token issuers, get shaken out of the market.

Those that survive the shake-up do so only by improving their products “to the satisfaction of early adopters.”

After the speculative crypto bubble exhausted in late 2017, the market was left in shambles as numerous projects failed and billions of dollars in market capitalization was erased. Back in 2018, Gartner’s own analysis identified that the market entered the trough of disillusionment, putting blockchain among the rapidly declining technologies such as autonomous driving, and IoT platforms. 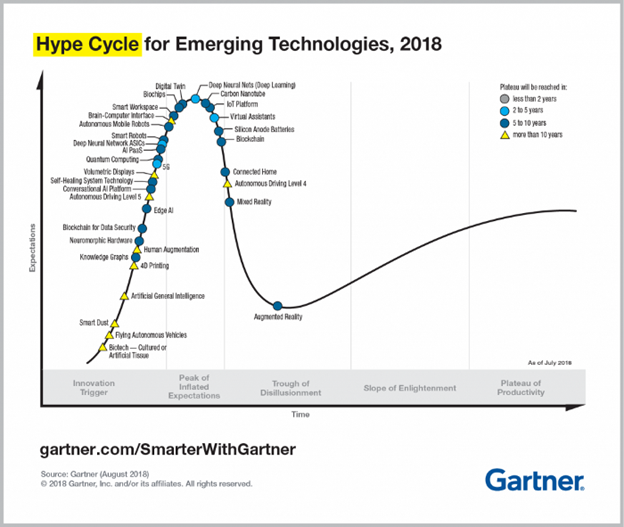 With almost 80 percent of the market cap wiped out, negative sentiment dominated the market, spreading disillusionment both among institutions dabbling in cryptocurrencies and retail investors.

After suffering its most devastating hit, the market took almost two years to fully recover.

It wasn’t until the rise of DeFi that the industry entered into the fourth phase of the Gartner Hype Cycle—the slope of enlightenment. Essentially the recovery phase, it’s the first time instances of how the emerging technology can benefit enterprises start to crystallize. According to Gartner, this is where second and third-generation products begin to appear on the market and less risk-averse enterprises begin funding projects and implementing the technology.

Last year’s DeFi boom attracted an unprecedented amount of new users to the market. And for the first time ever, it wasn’t just the promise of huge yields that made people flock to the crypto space—third-generation cryptocurrency projects like Cardano, Polkadot, and Chainlink offered a glimpse of a technologically-advanced future many believe to be achievable and sustainable.

The response to the global COVID-19 pandemic that resulted in controversial fiscal measures such as stimulus packages and quantitative easing seemed to diminish not just the retail sector’s trust in fiat currencies, but the institutional reliance on government-issued currencies as well. To diversify their treasuries and create the potential for huge profits, several high-profile companies began investing billions of dollars in Bitcoin.

And while many criticized MicroStrategy and Tesla for their “reckless” investments, the corporate jump to cryptocurrencies shows that more enterprises began to realize and better understand the benefits of cryptocurrencies—exactly as described in the Gartner Hype Cycle.

The plateau of productivity—the fifth and final phase of the Hype Cycle, where mainstream adoption truly begins to take off. Gartner describes this phase as the period where the criteria for accessing a project’s viability becomes more clearly defined and a technology’s market applicability begins to pay off by becoming globally relevant.

One of the main characteristics of the plateau phase is a significant slow-down of volatility and the adoption of a slower, more sustainable growth pace. And while it can be argued whether this could be applied to the crypto industry, some of the industry’s most influential voices believe that this is exactly where the crypto market currently is.

Su Zhu, the CEO of Three Arrows Capital, a Singapore-based hedge fund manager, said he believed the market was currently in the last Gartner cycle. The cycle, he explained on Twitter, won’t be as short-lived as the others and will extend many years into the future, bringing over a billion new people into the crypto ecosystem.

According to Zhu, the very fact the market has entered the plateau of productivity means that there was a high probability that we’d never see another major market crash like the ones we’ve seen in March 2020 and in January 2018.